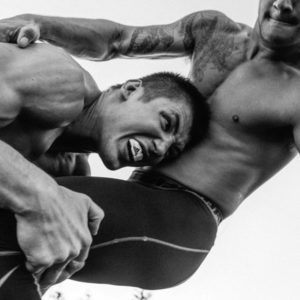 Greco-Roman Wrestling (or Graeco-Roman; see spelling differences) is a style of wrestling that is practised worldwide. It was contested at the first modern Olympic Games in 1896 and has been included in every edition of the summer Olympics held since 1908.[1] Two wrestlers are scored for their performance in three two-minute periods, which can be terminated early by a pinfall. This style of wrestling forbids holds below the waist which is the major difference from freestyle wrestling, the other form of wrestling at the Olympics. This restriction results in an emphasis on throws because a wrestler cannot use trips to take an opponent to the ground, or avoid throws by hooking or grabbing the opponent’s leg. Arm drags, bear hugs, and headlocks, which can be found in Freestyle, have even greater prominence in Greco-Roman. In particular, a throw known as a suplex is used, in which the offensive wrestler lifts his opponent in a high arch while falling backward on his own neck to a bridge in order to bring his opponent’s shoulders down to the mat. Even on the mat, a Greco-Roman wrestler must still find several ways to turn his opponent’s shoulders to the mat for a fall without legs, including (but not limited to) techniques known as the bodylock and the gut-wrench.[2] According to the International Federation of Associated Wrestling Styles (FILA), Greco-Roman wrestling is one of the six main forms of amateur competitive wrestling practised internationally today. The other five forms are Freestyle wrestling, Grappling/Submission wrestling, Beach wrestling, Pankration athlima, Alysh/Belt wrestling and Traditional/Folk wrestling.[3]

Submission wrestling (also known as submission fighting, submission grappling, sport grappling, or simply as No-Gi) or Combat wrestling (in Japan), is a formula of competition and a general term describing the aspect of martial arts and combat sports that focus on clinch and ground fighting with the aim of obtaining a submission using submission holds. The term “submission wrestling” usually refers only to the form of competition and training that does not use a “jacket”, “gi,” or “combat kimono,” often worn with belts that establish rank by color. The sport of submission wrestling brings together techniques from Folk Wrestling (Catch-as-catch-can), Luta Livre Esportiva, Freestyle Wrestling, Brazilian Jiu-Jitsu, Judo and Sambo. Submission fighting as an element of a larger sport setting is very common in mixed martial arts, Pankration, catch wrestling and others. Submission wrestlers or grapplers usually wear shorts, skin-sticky clothing such as Rash guards, speedos and mixed short clothes so they do not rip off in combat.