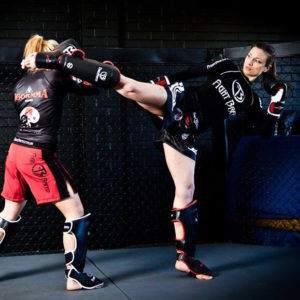 Also known in the western world as Thaiboxing, is a martial art from Thailand and its national sport. It is similar to other styles of kickboxing, but superior to them because of the allowed use of knees and elbows. Muay Thai is referred to as the “Art of Eight Limbs” or the “Science Of Eight Limbs” because it makes use of punches, kicks, elbows and knee strikes, thus using eight “points of contact”, as opposed to “two points” (fists) and “four points” (hands and feet) like in Western boxing, Kickboxing and other sport-oriented martial arts. This is the main reason why Thaiboxing is still the most dominant of stand up styles in all arenas of fighting, but especially in the now all-style orientated world of MMA (Mixed Martial Arts). Today there is almost as many women training in the art of Muay Thai as man, due to it’s great effectiveness in self defense (knees and elbows) and the fact that is a great outlet to get rid of accumulated aggression from a stressful day at work.